Do Certain Months Have Multiple Birthstones?

You’ve likely gone your entire life with the knowledge that each month has its own birthstone. While this is true, there are a couple months that have more than one. Let’s explore why.

The birthstone you’ve grown up claiming as your own hasn’t changed. However, if you were born in June, October, November or December, you actually have more than one. An article written for onecklace.com states, “Traditionally each month is associated with one birthstone but you will find some months have multiple birthstones. This fact does create some confusion but the multiple options for some months was created in order to allow more affordable options in addition to the traditional more expensive stones.”

The widely accepted birthstone for June is a pearl. The second, more affordable option for a June birthstone is called Alexandrite. The above mentioned article states, “Alexandrite is a spellbinding crystal that shows off different colors when viewed by light polarized in different directions. Its color shifts from bluish green in daylight to purplish and reddish tones in artificial light.” Some sources also include moonstone as one of June’s birthstones as well. It’s a cloudy stone with blueish hues.

Pink Tourmaline is the first birthstone for the month of October. Tourmaline actually comes in a variety of colors but can most commonly be found in pink. The second birthstone associated with October is an Opal. They are stones said to ‘contain the colors of all other gems’. It’s a multi colored, rainbow looking gem that changes beautifully as you shift it in the light. 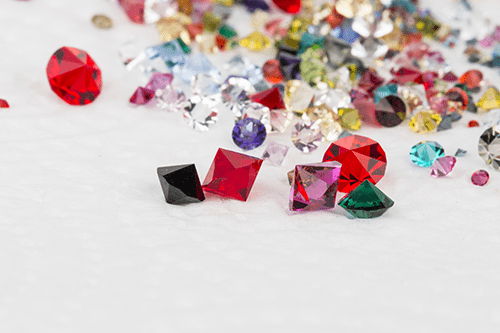 Those born in November have two unusual birthstones. Citrine and yellow topaz are both vibrant, fall colored gemstones. It’s not uncommon for them to get mixed up. Ranging from dark yellow to an orange/red hue, Citrine has a cloudy look to it. The above mentioned article also states, “Topaz is a gemstone available in a rainbow of beautiful colors. With colors in yellow, brown, blue, red, pink and even no color at all, Topaz is a gemstone that can be loved by many. Commonly confused with November’s alternative birthstone, Citrine, the Yellow Topaz is a separate and unrelated mineral species. Topaz is most popularly and commonly seen in shades of brown, yellow, yellow-gold, and orange, all very similar shades of the Citrine gemstone. However, Pure Topaz is a colorless and transparent and it is impurities that give this gemstone its plethora of colors.”

December is another month that claims three different stones. Turquoise, Zircon and Tanzanite are all blue hued gemstones. Turquoise is an incredibly popular material with lots of variation. Tanzanite has an interesting purple hue running through it and Zircon can be found in a variety of colors like blue, brown, red and even colorless.

Having secondary, more affordable choices makes purchasing your birthstone easier than ever. If you are lucky enough to have multiple birthstones, enjoy the variety of options available to you.