Skip to content
Home/horoscopes, profiles/Mayan Astrology Broken Down
Previous Next

The Mayans thought about time in a unique way. In our lives, we have horoscopes and zodiac signs. When the Mayans were alive, they had many worries daily. The last thing I picture is them learning about their horoscopes. That couldn’t be further from the truth.  They had their complicated way of deciphering the stars and applying it to their lives. The Mayans called it the tzolkin, here is a breakdown.

The day signs are the closest resemblance to our zodiac signs. One of the most significant differences is that there are twenty of them. Each of the signs is assigned to twenty-day periods in the calendar. Not only do the signs fall into a specific period they all have a direction. The directions all have a different meaning. Those that fall into the east are creative and like to initiate. If your sign is in is the west you are great at working with others. The south is known for connecting with their emotions and with others. Being a sign in the North makes you very practical and real.

To make it even more confusing, the Mayans add another layer to their signs that they call the trecenas. Not only are the day divided into twenty, but they’re also divided into groups of thirteen. Trecenas is Spanish for thirteen. The number thirteen is very significant to the Mayan culture. The Trecenas take the signs deeper in their emotions and how they relate to the other signs. They also give us a glimpse into their personalities. Just like the day signs, each of the trecenas is assigned a diety.

The Lords of the Night

The lords of the night are on the darker side. Nine lords rule the night. For this group, the Mayans broke down their calendar into groups of nine days. These lords of the night are the rulers of the underworld. For souls to make it into heaven, they must get past these gods. Not much has been recorded when it comes to the details. It is thought that they may represent the bad parts of our personalities. 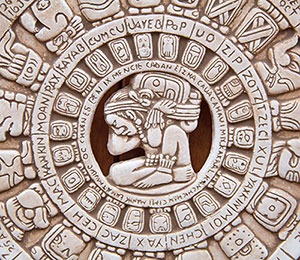 The Mayans have broken things into twenty, thirteen, nine, and now fifty-two. The tzolkin groups the years into fifty-two and each other those years have their sign. Like the other groups, the years will have different qualities. If you are born in the same year as another person, it is possible that you will have similar traits.

The Cycle of Venus

The cycle of Venus is when the Mayans looked at the planet, Venus. When looking at this, they broke things down into four periods. Each period has different values. Depending on which period you are in could determine your role in society. They could also play a part in your social values.

Have you been keeping track? The Mayans have found a way to break down the calendar in five different ways. Try and figure out where you fit in the Mayan calendar.